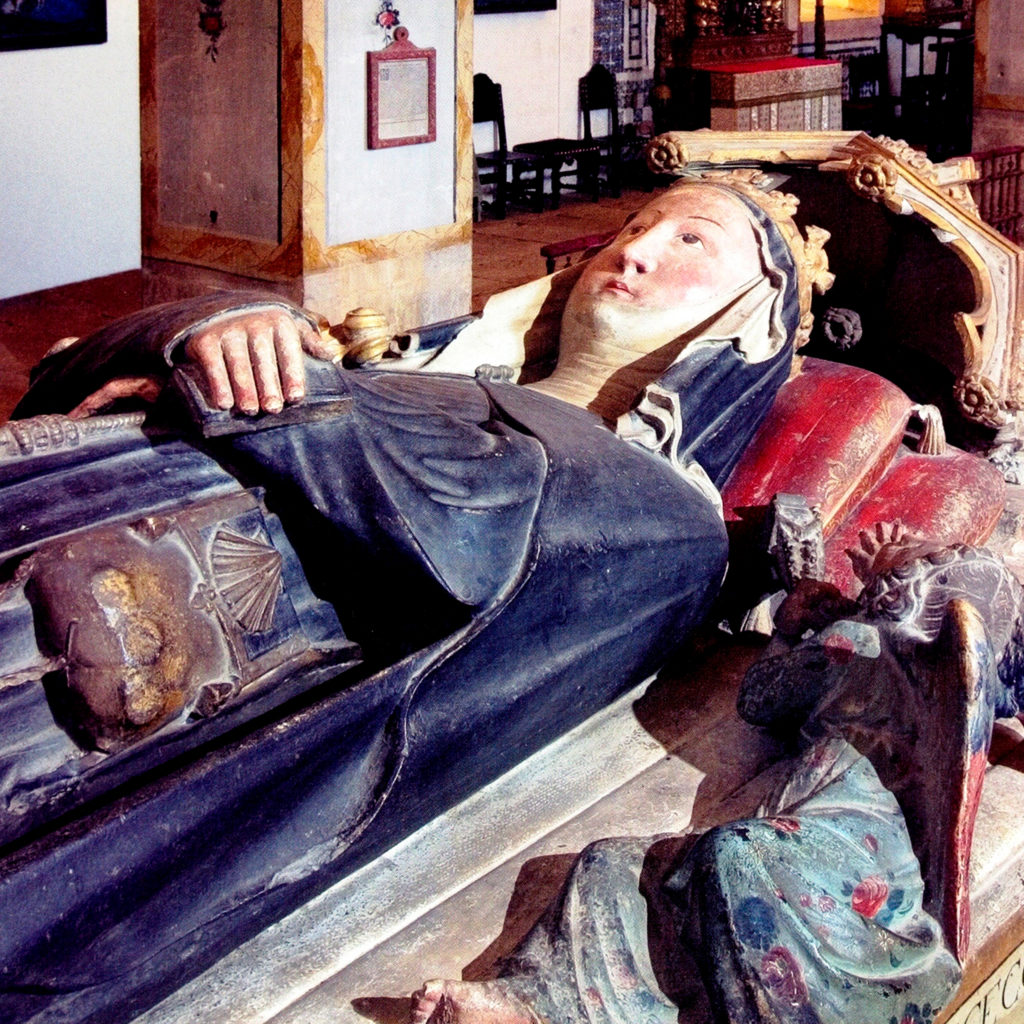 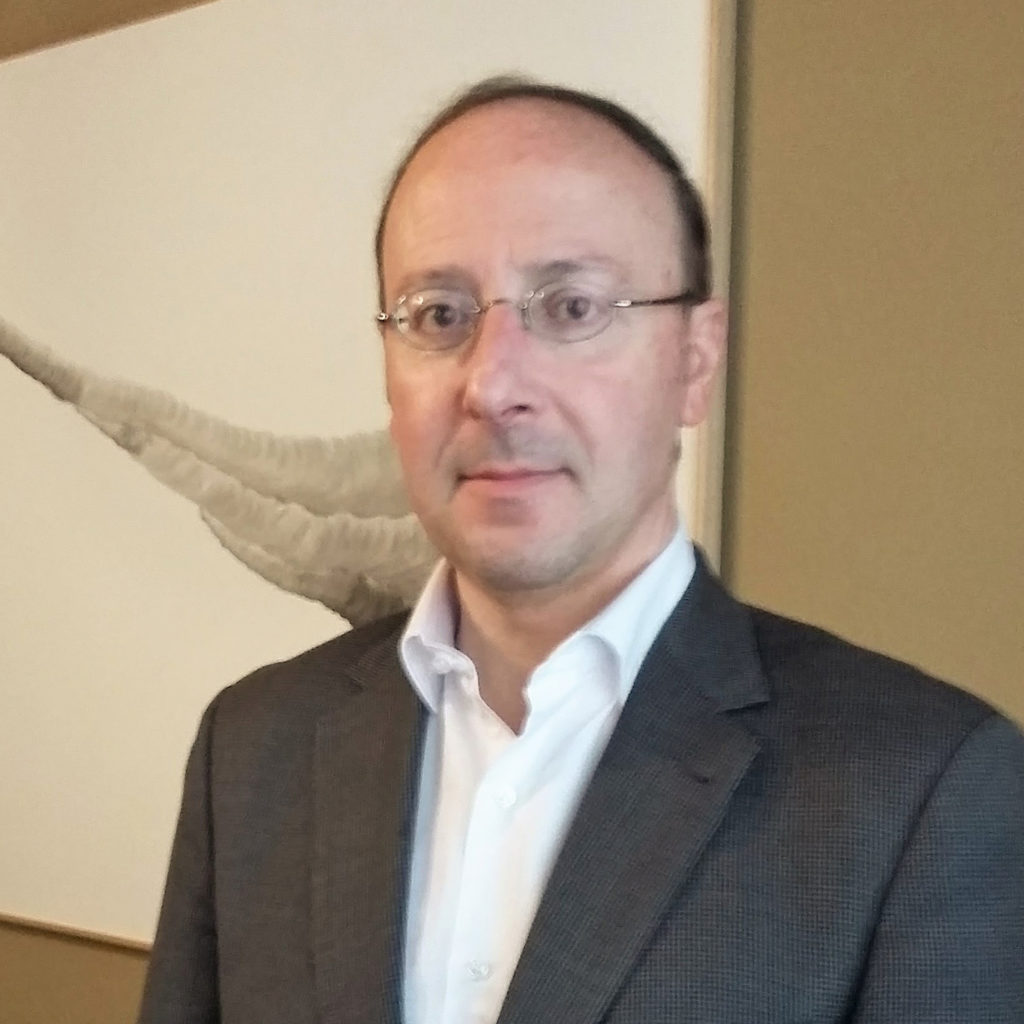 In 1612, in the Convent of Santa Clara de Coimbra, the magnificent Gothic tomb of Elizabeth of Aragon (c. 1270-1336), Queen of Portugal and wife of King Denis I, was opened to examine her mortal remains, an essential part of the canonisation process, which had begun many years earlier. Her profound devoutness and the countless charitable acts she performed during her lifetime had earned her the deep respect and admiration of the people. During the examination of the queen’s body, two elements were removed that had accompanied her on her journey beyond the grave: a tau-shaped staff made of jasper and wood clad in silver; and a pouch decorated with a real scallop shell. The two relics were removed from her tomb and became objects of worship: the staff remained in the Convent of Santa Clara in Coimbra, whilst the small pouch with the scallop was taken to the Royal Palace in Madrid.

The first of these items, the tau-shaped staff, was made in Santiago de Compostela in 1325, and is a replica of the staff held by the figure of Saint James the Greater that adorns the mullion on the Portico of Glory (c. 1188). According to the ‘Veneranda dies’ sermon included in Book I  of the Codex Calixtinus, it symbolises faith in the Holy Trinity. We are fortunate in that it is still conserved in Coimbra in the Convent of Santa Clara, together with the queen’s magnificent stone sarcophagus. However, the pouch decorated with the scallop shell, symbolising the good deeds that pilgrims -  spiritually renewed souls – are obliged to carry out until the end of their days, in accordance with the teachings of the ‘Veneranda dies’, was lost for ever in the blaze that swept through Madrid’s Royal Fortress in 1734.

Both items, the staff and pouch with the scallop shell, accompanied Elizabeth of Aragon on her journey beyond the grave so that she would be recognised as a pilgrim and worshipper of Saint James the Greater in the hope that he would intercede on her behalf during the judgement of her soul. A state beyond the grave which, in the medieval world, defined the place where the deceased were sent in anticipation of the Last Judgement; the majority of souls would dwell in purgatory for varying lengths of time, depending on the indulgences or other spiritual benefits they had accumulated during their lifetime, or thanks to the masses and particular sacrifices procured by their family members.

Indeed, the pilgrimage that took the widowed Queen of Portugal to Santiago de Compostela in 1325 can be considered an act of piety on her own behalf and also that of the  soul of King Denis of Portugal, who had died in January that year. The monarch had not been able to visit the Apostle’s tomb during his lifetime, but he had donated 300 maravedis to the Church in Santiago de Compostela. Queen Elizabeth set off from Coimbra accompanied by her entourage, and although it is not known whether she travelled overland or by sea, we do know that on her arrival in Padrón she dutifully visited all the sites traditionally associated with the Apostle. She then continued her journey on the back of an elaborately harnessed mule as far as Milladoiro, from where she made her way on foot to Santiago de Compostela. She arrived in the city on 25th July 1325, where she gave offerings to the Cathedral and attended the solemn masses to commemorate the Feast Day of Saint James.

The gifts Queen Elizabeth offered to the Apostle included silverware that had belonged to King Denis, the mule she rode for part of the way, tapestries depicting the arms of Aragon and Portugal, a set of sculptures portraying the Annunciation, and most importantly of all, her crown; a symbol of medieval royalty, whose power was bestowed by God.

As a show of appreciation for these valuable gifts – for centuries the Annunciation stood on an altar in the Cathedral’s retrochoir – earning the space between the Portico of Glory and the choir the somewhat tongue-in-cheek name of the Nave de la Preñada (literally the ‘Nave of the Woman with Child’) - Archbishop  Berenguel de Landoira gave the queen the staff and pouch which were included in her funerary offerings and identified her as a pilgrim of Saint James, both during and after her life.